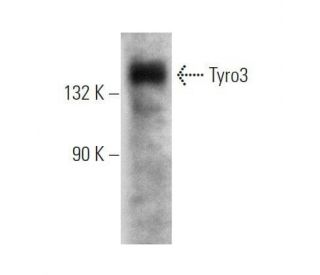 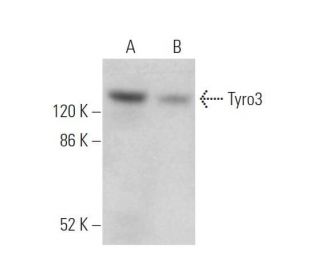 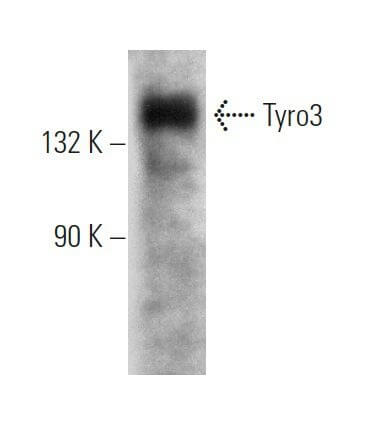 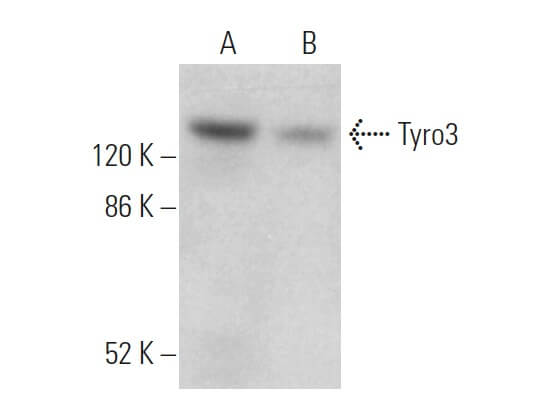 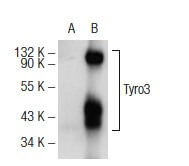 Tyro3 Antibody (A-7) is a high quality monoclonal Tyro3 antibody (also designated Tyrosine-Protein Kinase Receptor TYRO3 antibody, Tyrosine-Protein Kinase DTK antibody, Tyrosine-Protein Kinase RSE antibody, Tyrosine-Protein Kinase SKY antibody, Tyrosine-Protein Kinase TIF antibody, Etk-2 antibody, BYK antibody, RSE antibody, Rek antibody, Brt antibody, DTK antibody, SKY antibody, or TIF antibody) suitable for the detection of the Tyro3 protein of human origin. Tyro3 Antibody (A-7) is available as both the non-conjugated anti-Tyro3 antibody form, as well as multiple conjugated forms of anti-Tyro3 antibody, including agarose, HRP, PE, FITC and multiple Alexa Fluor® conjugates. Receptor tyrosine kinases (RTKs) represent an important class of transmembrane signaling molecules. Binding of the extracellular domain of an RTK to its cognate ligand leads to receptor dimerization and the activation of the intrinsic tyrosine kinase activity of its intracellular kinase domain. The Axl/UFO subfamily of receptor tyrosine kinases is comprised of members Tyro3 (also referred to as BYK, Brt, Dtk, RSE, Tif or Sky), Axl (also called Tyro7 or UFO) and Mer (also called Nyk, c-Eyk and Tyro12). Members of this family have a common molecular structure which contains an N-terminal extracellular domain comprised of two Ig domains, two FNIII domains and a membrane spanning single helix followed by the cytoplasmic tyrosine kinase domain. These RTKs are functionally significant in spermatogenesis, immunoregulation and phagocytosis. Tyro3, Axl and Mer are widely expressed in adult tissues with their expression most abundant in brain, testis, lymphatic and vascular tissue. Tyro3 has been shown to undergo posttranslational modifications including both tyrosine phosphorylation as well as glycosylation. Two proteins, Protein S and Gas6, have been proposed as ligands for the Axl/UFO family of receptors. Both function as anti-coagulants through an unknown mechanism. Gas6 was cloned as a growth arrest-specific gene, while Protein S is an abundant serum protein which is thought to act by indirectly inhibiting proteases involved in the coagulation response.

What is the recommended starting dilution for Western blot for sc-166359: Tyro3 (A-7) monoclonal antibody?

Asked by: jenniferc
The recommended starting dilution for Western blot is 1:100 with a dilution range of 1:100-1:1000. This information, along with other technical specifications, is available in the recommended protocol: https://www.scbt.com/scbt/resources/protocols/western-immuno-blotting
Answered by: Technical Support
Rated 1 out of 5 by Isabelle from Ne fonctionne pas chez la souris Ne fonctionne ni en WB sur des extraits de testicules de souris ni en immunohistochimie sur des testicules de souris
Rated 5 out of 5 by Moyer from good We can demonstrate the cloning of Gas6 as a growth-arresting specific gene, and protein S is a rich serum protein that is thought to work by indirectly inhibiting the protease involved in coagulation and is a completely good quality, very good
Rated 5 out of 5 by ET from Satisfactory Western blot data of Tyro3 expression Satisfactory Western blot data of Tyro3 expression in non-transfected and human Tyro3 transfected 293T whole cell lysates. -SCBT QC