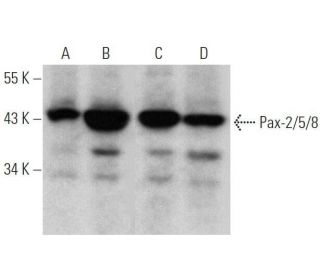 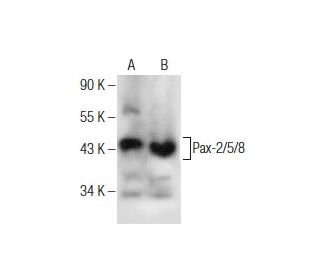 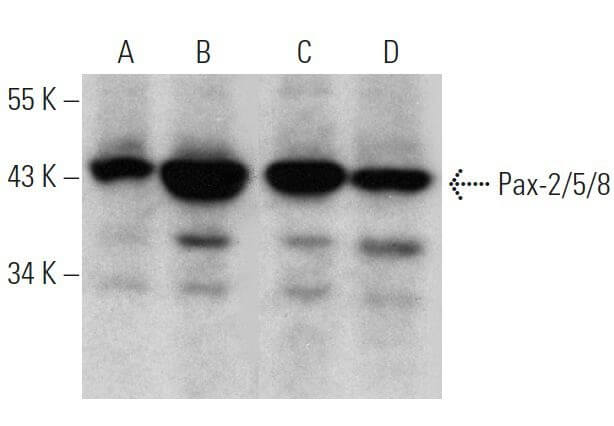 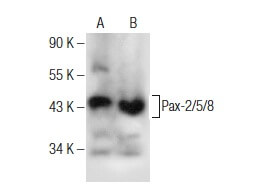 Pax-2/5/8 Antibody (G-3) is a high quality monoclonal Pax-2/5/8 antibody suitable for the detection of the Pax-2/5/8 protein of mouse, rat and human origin. Pax-2/5/8 Antibody (G-3) is available as both the non-conjugated anti-Pax-2/5/8 antibody form, as well as multiple conjugated forms of anti-Pax-2/5/8 antibody, including agarose, HRP, PE, FITC and multiple Alexa Fluor® conjugates. Pax genes contain paired domains with strong homology to genes in Drosophila which are involved in programming early development. The PAX2 gene is expressed in primitive cells of the kidney, ureter, eye, ear, and central nervous system. More specifically, in human embryo sections, PAX2 is expressed in the optic vesicle and later in the retina, in the otic vesicle and later in the semicircular canals of the inner ear, and in mesonephros, metanephros, adrenals, spinal cord, and hindbrain. PAX2 mutations can be responsible for renal hypoplasia, either isolated or associated with various ophthalmologic manifestations ranging from retinal coloboma to microphthalmia. The gene which encodes Pax-2 maps to human chromosome 10q24.3-q25.1. Lesions in the PAX6 gene accounts for most cases of aniridia, a congenital malformation of the eye, chiefly characterized by iris hypoplasia, which can cause blindness. PAX6 is involved in other anterior segment malformations besides aniridia, such as Peters anomaly, a major error in the embryonic development of the eye with corneal clouding with variable iridolenticulocorneal adhesions. The gene which encodes Pax-6 maps to human chromosome 11p13.