(0)
Write a review Ask a question
See product citations (1)
Application: Xanthohumol from hop (Humulus lupulus) is an inhibitor of cytochrome P450 enzymes
CAS Number: 6754-58-1
Molecular Weight: 354.40
Molecular Formula: C21H22O5
Supplemental Information: This is classified as a Dangerous Good for transport and may be subject to additional shipping charges.
For Research Use Only. Not Intended for Diagnostic or Therapeutic Use.
* Refer to Certificate of Analysis for lot specific data (including water content).
DISCOUNT: Bulk orders of Chemicals totaling $1,000 or more receive a 5% discount. 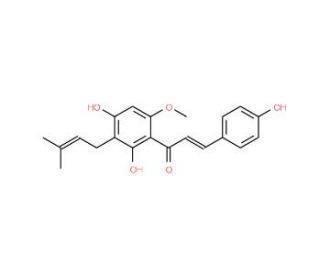 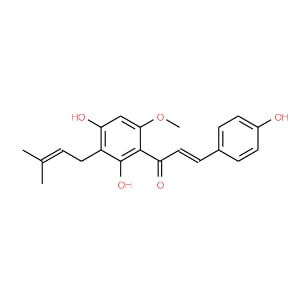 Xanthohumol from hop (Humulus lupulus) has demonstrated antiproliferative and cytotoxic effects in human cancer cell lines. It has been shown to inhibit DGAT (diacylglycerol acetyltransferase) and human CYP (cytochrome P450 enzymes). It has also been shown to inhibit the expression of HIF-1α and VEGF under hypoxic conditions. Xanthohumol from hop (Humulus lupulus) is an inhibitor of DNA Polymerase, VCP and PKB Kinase.

See how others have used Xanthohumol from hop (Humulus lupulus) (CAS 6754-58-1). Click on the entry to view the PubMed entry .