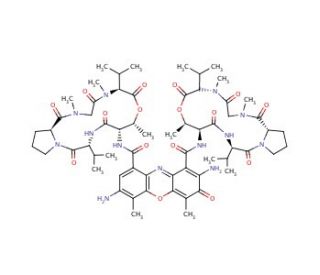 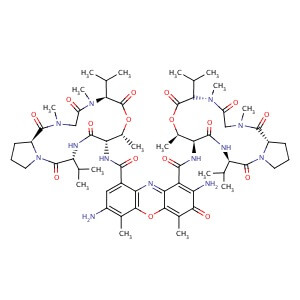 7-Aminoactinomycin D (7-AAD), an analog of the antibiotic actinomycin D (sc-200906), is a fluorescent DNA dye which is useful for quantifying apoptosis. 7-AAD has also been used in studies on cellular necrosis, chromosome analysis and in cell cycle studies. As a fluorescent DNA dye, 7-AAD is able to intercalate DNA via binding to the GC regions. When used in flow cytometery, 7-AAD can be used to discriminate between live cells as well as early and late apoptosis. Additionally, 7-AAD can also be combined with other staining procedures for analysis of intracellular and cell surface antigens enabling multiparametric analysis. When utilizing 7-AAD with flow cytometery, early and late apoptosis can be studied by varying the concentration of 7-AAD. During apoptosis, the cellular plasma membrane is altered progressively, which allows the cell membrane to become permeable to 7-AAD. 7-AAD staining can also be adapted to include staining with other dyes for intracellular and cell surface antigens. 7-Aminoactinomycin D is an inhibitor of DNA Polymerase and RNA Polymerase.