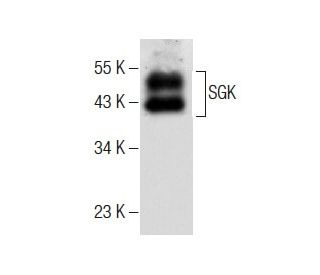 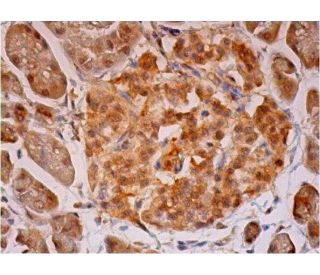 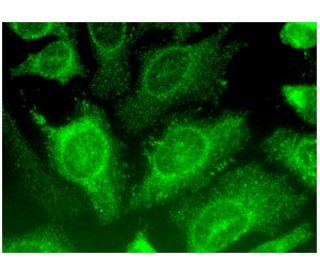 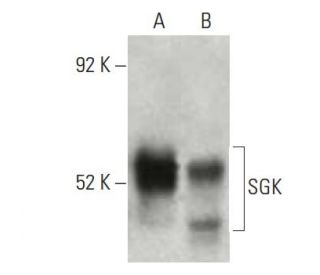 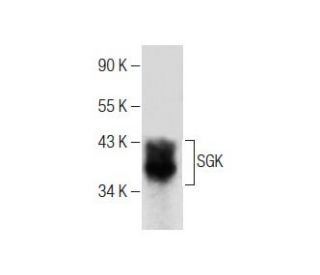 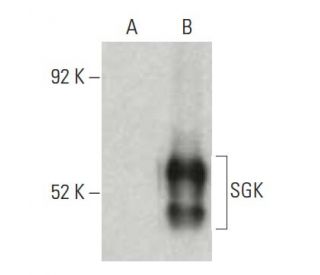 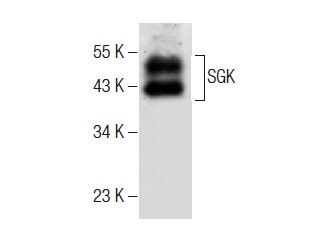 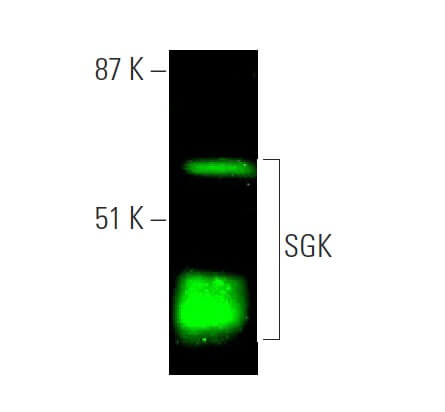 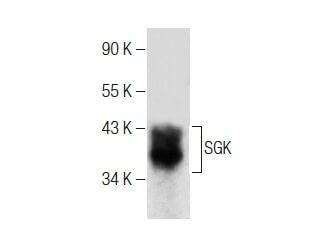 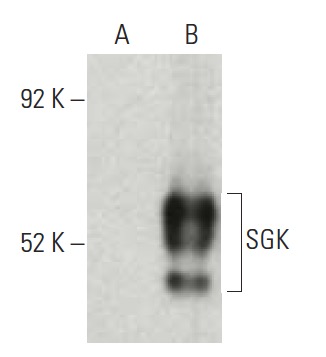 SGK Antibody (G-4) is a high quality monoclonal SGK antibody (also designated SGK1 antibody, serum/glucocorticoid regulated kinase 1 antibody, or SGK1 kinase antibody) suitable for the detection of the SGK protein of mouse, rat and human origin. SGK Antibody (G-4) is available as both the non-conjugated anti-SGK antibody form, as well as multiple conjugated forms of anti-SGK antibody, including agarose, HRP, PE, FITC and multiple Alexa Fluor® conjugates. Serum- and glucocorticoid-regulated kinase (SGK), also known as SGK1, is a serine/threonine protein kinase and a member of the "AGC" subfamily, which includes protein kinases A, G, and C. SGK plays an important role in activating certain potassium, sodium, and chloride channels, suggesting an involvement in the regulation of processes such as cell survival, neuronal excitability, and renal sodium excretion. SGK contains a catalytic domain, which is most similar to Akt1 (also known as protein kinase B or PKB). SGK is a downstream target of PI 3-kinase-stimulated growth factor signaling, with 3-phosphoinositide-dependent protein kinase 1 (PDK1) capable of phosphorylating the activation-loop of SGK at Threonine-256. The adrenal corticosteroid hormone, Aldosterone, induces the transcription of SGK, which mediates Na + transport by stimulating epithelial sodium channel activity. The SGK promoter contains a glucocorticoid response element and an SP-1 regulatory element, and is a transcriptional target for p53. SGK is also a component of the p38 MAPK-mediated response to hyperosmotic stress. The human SGK gene maps to chromosome 6q23 and encodes the 431-amino acid SGK protein.

Can SGK (G-4): sc-377360 monoclonal antibody be used in IF or IHC with mouse tissue or cells? Will there be non-specific staining?